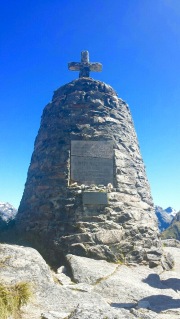 In February I wrote: We die. And we are dying. Life, one long expiration after that initial gulp that sets it all in motion. And some people live in castles and don’t know the price of bread. Others wield machetes and rush into malls and museums shouting “Allah Akba”. In March and April they drove trucks across bridges and people.Some genuinely and sincerely do not know they are on their husband’s payroll and others genuinely and sincerely believe God is on their side. And the rest of us remain actor spectators in the comedy as it unravels, playing out our bit parts true to the Bard’s lines. Poetic farce? Tragic-comedy? The only certitude is that death awaits us.

And today is Easter Sunday and I can hear the bells ringing. The Rabbi, Tom Cohen of the American Synagogue in Paris sent a message of well wishing to the Pastor of the American Church in Paris. The pastor read his message to the congregation. The elder brother reached out to its younger sibling. The younger took his hand and said yes, thank you. “Alléluia”! And the congregation chorused “Hallelujah”. Such hope in my heart – such belief in the power of love to overcome all of life’s trials – such joy and gratitude to those who show the way; who show us how to do it. Small gestures that can cut through the hubris and noise of this world.

She is 87 years old. Her youngest daughter was assassinated many years ago. Her murderer was finally caught 16 years after the event. His last victim escaped to tell the sordid truth. The 87 year old said and says that his eye could never bring back the eye of her child and so she renounced retributive justice. Her husband never forgave her. She knits bonnets for “Innocent” bottles of fruit juice, teaches the illiterate to read and the foreigner to speak French. Christ rises with her every day and she gives thanks for the life that remains to her. Her husband is dead, her brother too and another daughter lost to cancer. Her face is radiant with love when her mind looks to her faith in God. Her faith is of the living kind sustained but not poisoned by the rituals of the Catholic tradition. She speaks with knowledge of both testaments: the elder and the younger: the one of justice and righteousness and the other of love. She wanted to work with a coach to “put things into their rightful place”. And how would she know that she had “put things in their rightful place?” She would be “looking forward to the life and love left for her to live”

The wishes and acts of an elderly lady can cut through the hubris and the noise of this world.

And on this day, the 8th day, the new day, there is a call to break with old habits, to clean the house, to shed the old skin, to change the familiar pattern of me and mine, to stand tall in the beauty of our humanity, to overcome fear and hatred, to rise above the hubris and noise of this world, to embrace the world while changing ourselves, to ring the bells and proclaim “And Hate Shall Have No Dominion”

And so when we, in France go to the urns next Sunday, may we vote, not with anger or resignation but with conviction that one voice can cut through the hubris and noise of this world. May we not vote from a place of pain or belief in the greatness of a mythical past but rather from a place of hope that our voices do count; that we do need each other and that the frontiers of our hearts know no boundaries.

Please think of someone you have met whose gestures, small or large cut through the hubris and noise of this world regardless of their faith or lack of it; one who has raised his head higher than his navel for long enough to perceive his fellow human being as being worthy of love and respect.